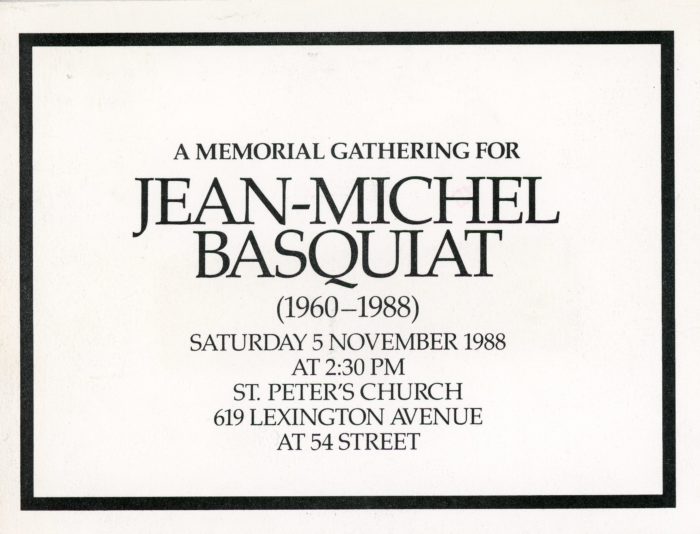 For serious collectors of art ephemera one important consideration is that the item date from the time the artist was alive and working. There is a certain logic to this. The best art ephemera chronicles an artist’s career, and for most artists very little of significance happens after their death.

Jean-Michel Basquiat is the exception here, an artist whose presence, popularity and importance continued to surge after he died. Basquiat’s short eight-year career, belies his prodigious production, and there has been much to discover and re-evaluate after his death. His soaring prices – a key component of a much broader art-world story – has also kept him front and center. Finally, there is the dramatic arc of Basquiat’s brilliant but tragic life. The story of a groundbreaking “outsider” climbing to the heights and then dying young has proved irresistible for writers, filmmakers and graphic novelists.

Basquiat’s early years as the street artist SAMO (a collaboration with Al Diaz) was the focus of this exhibition featuring photographs of SAMO graffiti by Henry Flynt, a Fluxus artist who is known for coining the term “concept art.”

The 1992 Basquiat retrospective exhibition at the Whitney Museum of American Art greatly enhanced his art world prestige. The fact that the singer Madonna and the cable television channel MTV helped finance the show added to his celebrity status.

The marketing of Basquiat’s work was international. This card for a Basquiat exhibition in Tokyo features one of the collaborative paintings that he did with Andy Warhol.

Basquiat was the star of Downtown 81, a film directed by Edo Bertoglio with a script by Glenn O’Brien. Shot in 1980-1981, the film was not completed until 2000. This exhibition with photographs by Edo and Maripol celebrated its long-delayed release.

A single 35mm roll of photographs of Basquiat taken in 1979 by Nicholas Taylor is the subject of this exhibition brochure. Taylor and Basquiat were both in the short-lived band Gray.

In order to provide a context for Basquiat, some galleries opted to juxtapose his art with works by artists he admired. In addition to this catalogue, Gallery 98’s Posthumous Basquiat page also includes catalogues for exhibitions featuring Basquiat alongside Cy Twombly, Raymond Saunders and Andy Warhol.

This illustrated children’s book by artist Javaka Steptoe is noteworthy for its emphasis on Basquiat’s childhood, and the cultural context in which he was raised.

In 2017 Basquiat’s reputation rose to new heights when a 1982 painting sold at auction for over $110 million dollars. To promote the auction, Sotheby’s produced two oversized newsprint publications filled with photographs of Basquiat and related art ephemera.