The bus tour of Forest Hills ends at the ramp at Thorneycroft Apartments, where a new Ramones mural will be unveiled to mark the spot where punk was born. 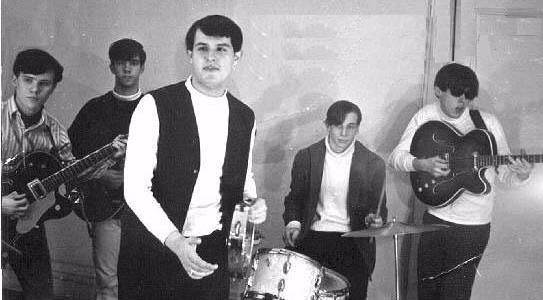 “The Ramones all originate from Forest Hills and kids who grew up there either became musicians, degenerates or dentists. The Ramones are a little of each.” — Tommy Ramone, first press release

Next week, on Sunday, June 5, the Queens Museum presents a day of events to accompany the exhibition “Hey! Ho! Let’s Go! Ramones and the Birth of Punk.”

The day begins at 2 p.m. at the museum, with an exhibition tour by co-curator Marc H. Miller (founder of Gallery 98).

Activities continue with a bus tour of Forest Hills, Queens, home of the Ramones. Guiding the tour is Richard Adler, who played with the future Johnny and Tommy Ramone in the band Tangerine Puppets while all three were students at Forest Hills High School. Tour stops include the former sites of the Coventry nightclub (depicted on HBO’s Vinyl) and the Art Garden gallery, in whose basement Joey’s mother hosted the first Ramones rehearsals. Also on the itinerary are Forest Hills High School (alma mater of the Ramones as well as Simon & Garfunkel), and the various Ramones’ childhood homes.

The tour culminates at the Thorneycroft Ramp, a “hotspot for misbehavior” and second home for the teenaged future Ramones. There, a Ramones mural will be unveiled, painted by East Village artist Ori Carino from Bob Gruen’s classic photograph of the four Ramones at the ramp in 1975. Developed in conjunction with the Queens Museum exhibition, Carino’s mural marks the spot where punk was born. The unveiling ceremony will feature remarks by musician and author Mickey Leigh (Joey Ramone’s brother) and others.

Seating for the bus tour is limited. Purchase tickets in advance here ($10) to ensure a seat.

All are welcome to join at the mural unveiling at 4:30. The ramp is located at 66th Avenue between 99th and 102nd Streets in Forest Hills, Queens.

Learn more about the event by going to the Queens Museum website here.

Punk magazine founder and cartoonist John Holmstrom at the Queens Museum, with his map of the Ramones in New York City. Next to the map are Tommy Ramone’s t-shirt from Forest Hills High School and a portrait of Joey Ramone by his mother, artist Charlotte Lesher, who ran an art gallery on Queens Boulevard. Tour attendees will each receive a copy of Holmstrom’s map. (Photograph by Andrea Compa.)